Visit to the Martindale Pioneer Cemetery

OTTAWA – Since returning to Canada as Ambassador in 2006 (I served as number two in the Embassy between 1985-90), I have been involved in several important events marking the arrival in Canada of Irish men, women and children fleeing the horrors of the Great Famine. 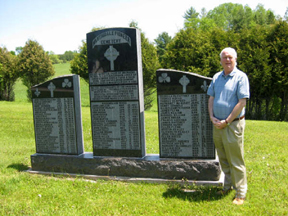 DECLAN KELLY the Ambassador of Ireland to Canada is shown above at the memorial to the survivors of the Great Irish Famine at the Martindale Pioneer Cemetery in western Quebec.

ANNE KELLY is shown above at the Celtic cross which stands beside the memorial in the Martindale Pioneer Cemetery. The cross which was designed by Ethna O’Kane of Belfast depicts the journey across the ocean on the famine ships to the hope of a better future in North America. 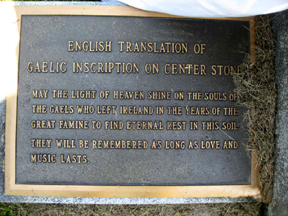 THE ENGLISH translation of the Gaelic inscription on the centre stone reads: “May the light of heaven shine on the souls of the Gaels who left Ireland in the years of the Great Famine to find eternal rest in this soil. They will be remembered as long as love and music lasts.” 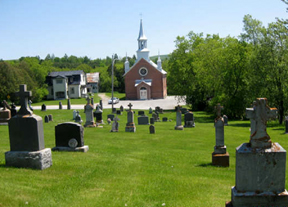 THE CHURCH at St. Martin’s parish in Martindale which was built by the Irish famine survivors when they settled this area of the Gatineau Valley in Quebec.

In 2007 President Mary McAleese opened the beautiful “Ireland Park” memorial in Toronto to commemorate the extraordinary events of May-October 1847 when some 38,000 famine victims passed through Toronto which then had a population of just 20,000.

I have also made three visits to Grosse Île where 5,500 famine victims are buried, the largest recorded number of Irish people buried in one place outside of Ireland.

My most recent visit was in May of this year when I accompanied Irish Government Minister Eamon Ó Cuiv and Canadian Minister for the Environment Jim Prentice to the Island.

This year marks the centenary of the erection of the Celtic Cross on Grosse Île by the Ancient Order of Hibernians.

Also, this year the Irish Government announced that the Great Famine would from now on be commemorated each year both in Ireland and overseas. Canada was chosen as the first overseas destination for the commemoration.

By this decision the Irish Government acknowledged the central role played by Canada in assisting the tens of thousands of Irish people fleeing the Famine.

In the terrible summer of 1847 over 400 ships set out from Ireland and Britain carrying 100,000 people. Some 18 to 19 thousand died on the journey. Some are buried at sea and the rest are buried all along the St. Lawrence Seaway, from the Gaspe to Toronto.

The Martindale Pioneer Cemetery
Some of those fleeing the Famine eventually settled in the western part of Quebec in the Gatineau Valley about one hour north of Ottawa.

Inspired by a visit to the Embassy last year by Catholine Butler, I visited the tiny hamlet of Martindale last Friday accompanied by my wife Anne.

The cemetery is nestled amid beautiful rolling hills very reminiscent of rural Ireland. As we approached this tranquil setting on a beautiful early summer’s day we were both immediately impressed by the beautiful Celtic Cross which marks the site.

Beside it is the elegant monument with the names of all those who are buried in the cemetery.

As we read the names on the monument, Anne and I could not help but reflect on the difficulties faced by our ancestors as they struggled to make a new life in a strange land. However, despite the appalling circumstances of their arrival they did succeed and in doing so they helped make Canada the great country which it is today.

Something of that pioneer spirit was manifested in the extraordinary job done by Catholine and those who assisted her in making sure that the early pioneers who suffered so much, and now lie buried far from their homeland, will not be forgotten.

Readers of The Celtic Connection will be familiar with the full story of how the Cross and Monument came about.

For her remarkable achievement in preserving this important part of Irish history in Canada, I would like to say a sincere “Go raibh maith agat” (Thank you in Irish) to Catholine on my own behalf and on behalf of the Irish people.