“They Will be Remembered As Long as Music and Love Lasts”

[The following is a dream I had on September 15, 1990: “I have been given an opportunity to see an overview of my life from a higher place. I have walked up to stairs to the next level and I’m being interviewed.

“We have just finished a big feast dinner with family and friends. A long table laden with food prepared by everyone. We are all sitting around having a wonderful time. During the meal my father dies. Although I am sad, I am glad he is here with everyone when he dies and not alone. I encourage him to continue along his journey and let him know that it is alright for him to leave, everything is ok.

“Throughout the course of the meal there are many other incidents – births and deaths – so much happens but there is consistent thread of joy.

“When I go up the stairs to the next level I am aware that anything I was unable to accomplish at this level is all possible at the next one. As I am being interviewed, my mother is beside me. She is talking about hunger.

“I am confused. I said I thought this was heaven and I thought there was no hunger in heaven. She replied ‘no this is not heaven, it is only another level and we only change form, we are not yet completely spiritual. We still feel hunger and pain’. Despite this I feel that shortly I will be able to speak with the loved ones who went before me.”] 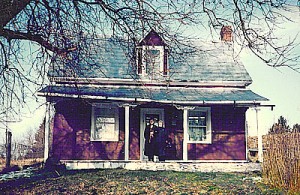 THE GANNON family homestead on Martindale, Quebec. Standing on the front porch is Maura McCay with her grandmother Gladys Gannon.

When I was a child growing up in the Gatineau Valley north of Ottawa, my family was particularly attuned to the cycle of the seasons. As an agricultural community, everyone was acutely aware of the power of Mother Nature and the circle of life, death and renewal.

Although my father who was born in County Tyrone, Northern Ireland, was a more recent immigrant to this country, my mother’s people were also Irish immigrants of an earlier generation. Those people arrived on these shores in the mid-1800s as destitute refugees, grieving the loss of country, family and friends as a terrible famine ravaged their land.

While the Great Hunger was imbedded in the consciousness of the small rural villages in the Gatineau Hills, during my childhood it was a distant memory as the farmers thrived and children sprouted everywhere. Classrooms at St. Michael’s school in Low were filled with inter-related cousins whose families had arrived together during those early years.

There was a very close connection between farms from Venosta, Low, Bennan’s Hill and Farrellton – actually throughout the entire area. Most people were related through marriage in one way or another, however distant and removed, and there was a sense of community and connection. People worked hard, they helped each other and worshiped together. Victories were celebrated together and sorrows were shared among many.

Of course the Church always played a central role and our parish was St. Martin’s on the Martindale Road. It was here that our parents were married, the children were baptized and we buried our dead. 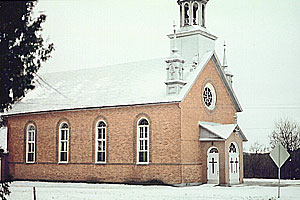 St. Martin’s was built at the top of a hill – visible as you approached from the south. Directly across the road was the graveyard and every Sunday after Mass, people would walk across to visit their loved ones. They would tend the grave sites, bring flowers, or just kneel and pray.

Just below the hill there was another burial ground, one much older and which for many years had been largely forgotten and neglected. This was until my mother became involved in a project to restore the property and honour the memory of the people buried here.

These were our ancestors who had survived the ravages of the Famine and the nightmare of the ocean crossing aboard coffin ships known to deliver as many to the bottom of the sea as to the final destination.

They had survived disease and death and arrived at Grosse Île in Quebec. Again thousands more met their death at Grosse Île, before these survivors finally found a home among the green and rolling hills of the Gatineau.

My mother began visiting these ancestors during a particularly difficult period of her life. She was pregnant with a child which she was convinced was dead inside her. Her concerns fell on deaf ears with the medical profession and the Catholic Church who advised her that she needed to carry through to her full term.

At the time she had three small children at home who were in need of their mother and she feared she would not survive to see them grow. In her desperation she began to visit the ruined cemetery and ruminate about her situation.

Sitting among the fallen headstones which carried the names and dates of birth and death of the men, women and children who had come before her, she began to speak to them. She made a pact that if she could survive her ordeal, she would dedicate herself to restoring their rightful memory here in their final resting place.

What happened in the interim is a long story and one better left for another day but the final outcome was that my mother survived the birth of her child but her infant son did not.

In the place where the ancestors are buried now stands a magnificent Celtic cross which guards over a monument bearing the names of all those buried on that sacred site. It is inscribed with the words, “May the light of heaven shine on the souls of the Gaels who left Ireland in the years of the Great Famine to find eternal rest in this soil. They will be remembered as long as love and music lasts.”

Each person and every family has their stories. There is a time for everything, a time to sing and dance, and a time to honour the memory of our dead. Light a candle and say a prayer, not only for our own cherished loved ones but for all those who have gone before us.