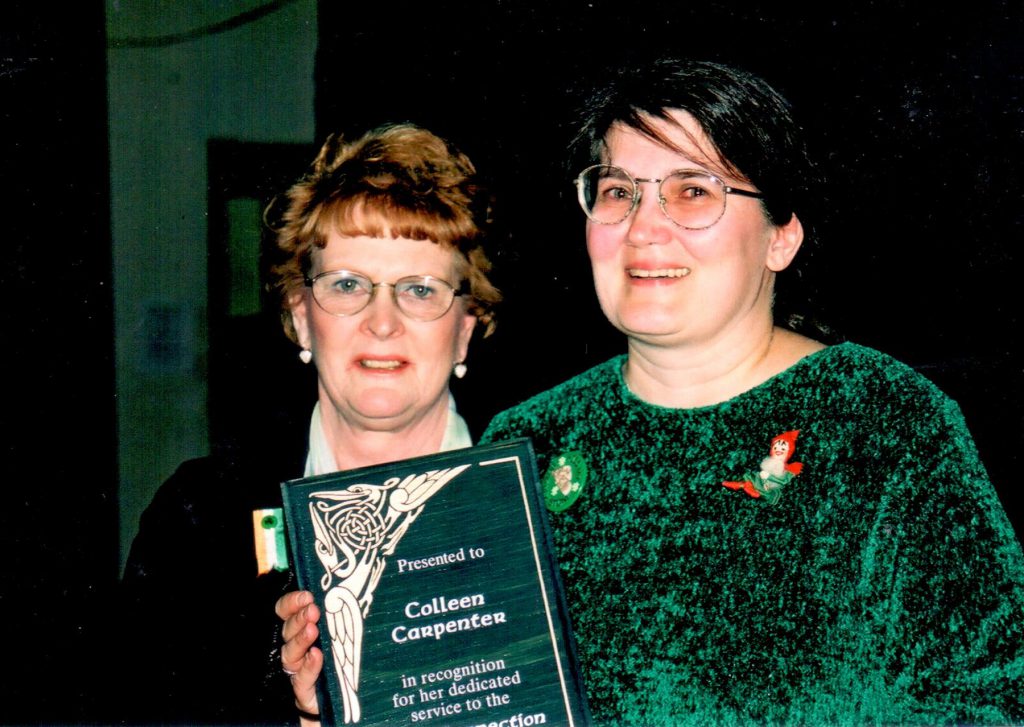 VANCOUVER – In the late Nineties I took a course in desktop publishing and in order to graduate you had to intern for two weeks.

I had read The Celtic Connection about a year previously and thought since I had an interest in Ireland that I would ask my teacher to enquire there.

After I graduated I kept volunteering at the paper and was eventually asked to join the staff.  Little did I know that the adventures would soon begin.

First of all, with a newspaper you can be working mornings, afternoons and late into the night depending upon the deadlines and the presses’ availability.

One night, after Maura had been up for several days working on the paper, she passed out. Horrors! The paper had to be at the printers in a few hours. So we lovingly shoved her into the shower to “freshen up.” Luckily she revived enough to get the issue to press.

Catholine scheduled her knee surgeries around the paper’s convenience, not hers.  She recovered with the phone in one hand and her knee propped up on a pillow.

I, suffering from a bout of bronchitis, ended up having documents delivered to my house so I could proofread. Wearing gloves and a mask I was careful not to spread the germs.

Forget the show must go on, in the newspaper biz unless you’re dead you better be there for the deadline!!

Despite these and many, many more roadblocks, we always got the paper to the printers on time.

In the years before the paper was uploaded in digital format, Maura would have to drive late at night to get the page layouts to the press. Tom (Catholine’s husband) and I would sometimes take over that task.

Late at night we would wind our way through the ladies of the night on Pandora Street to reach the back door to deliver the layout flats to the printers.

We would return early the next day to pick up the bundles of printed papers for distribution – no ladies in sight by that time. There are interesting sights in the middle of the night!

The day that Maura was able to send the paper electronically to the printers cut down on delivery time but also cut out our late night voyages.

I would proofread the paper, and I mean the whole paper, in a few hours (so please excuse any lapses of concentration that let a few typos appear).

I would sit in a chair with the pages to be proofed on my lap and before I knew it I would have a cat or a dog, or both deciding that I should be petting them and generally paying them attention.

Lola (the cat) would somehow know exactly what paragraph I was reading and would sit right on those words. If I gently moved her she would take offense and let me know with claws and teeth that no one upsets the queen – the title she had given herself.  No danger pay though.

My furry co-workers were one of the great pleasures of my proofing job.

As the years went by we became a tight little team.

After Tom passed away, José (Maura’s husband) stepped up to the plate and would go to the printers to pick up the bundles of papers for distribution.

Our volunteer and professional drivers would be able to make thousands of papers virtually disappear in a few hours.

These papers would find their way all over the Lower Mainland and down to Seattle. Our drivers were always so dependable in making sure the papers were delivered.

Papers destined for our subscribers would all be labelled by the ever-efficient Arlyn and then delivered to the main Canada Post office where they would be sent around the world.

The new depot in Richmond provided some adventures, like the time the security gate started closing while the car was only half way through. Luckily, Catholine was able to put on some speed and we squeaked through.

I will miss the interviews that Catholine set up.

I would go with her to write down names etc., but it was Catholine who did the interviews, took the pictures, and spoke to the owners of shops, pubs, small businesses, artists and sports figures etc.

It was always interesting to meet the people behind the names as I would often send them correspondence.

Then, there were the St. Patrick Day parades. I’m sure there are many who remember Tom O’Flynn as St. Patrick.  Mark stepped up to portray St. Patrick in later years.

And, of course, there was the ever-effervescent Miguel who played the leprechaun distributing sweets to all the children. 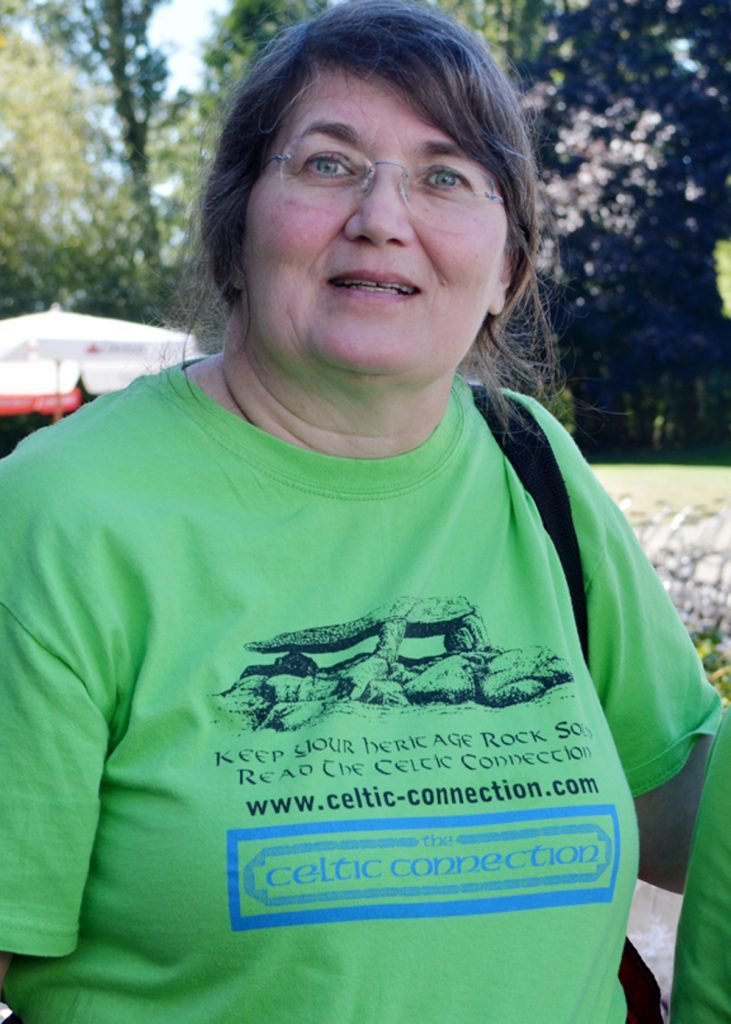 OUR ANNUAL fundraising golf tournaments were a lot of work and Colleen was always working behind the scenes to help make them such a great success.

The annual fundraising golf tournaments were also a lot of work but always enjoyable.

Catholine would bake her famous brown bread which was one of the attractions of the tournament.

It was always a great day and so heartening to see so much community support from the people who donated prizes, the golfers and the visitors who came out to enjoy the day.

There were also countless fundraising dances and events that helped to keep the press running for us…….ah, the good old days! 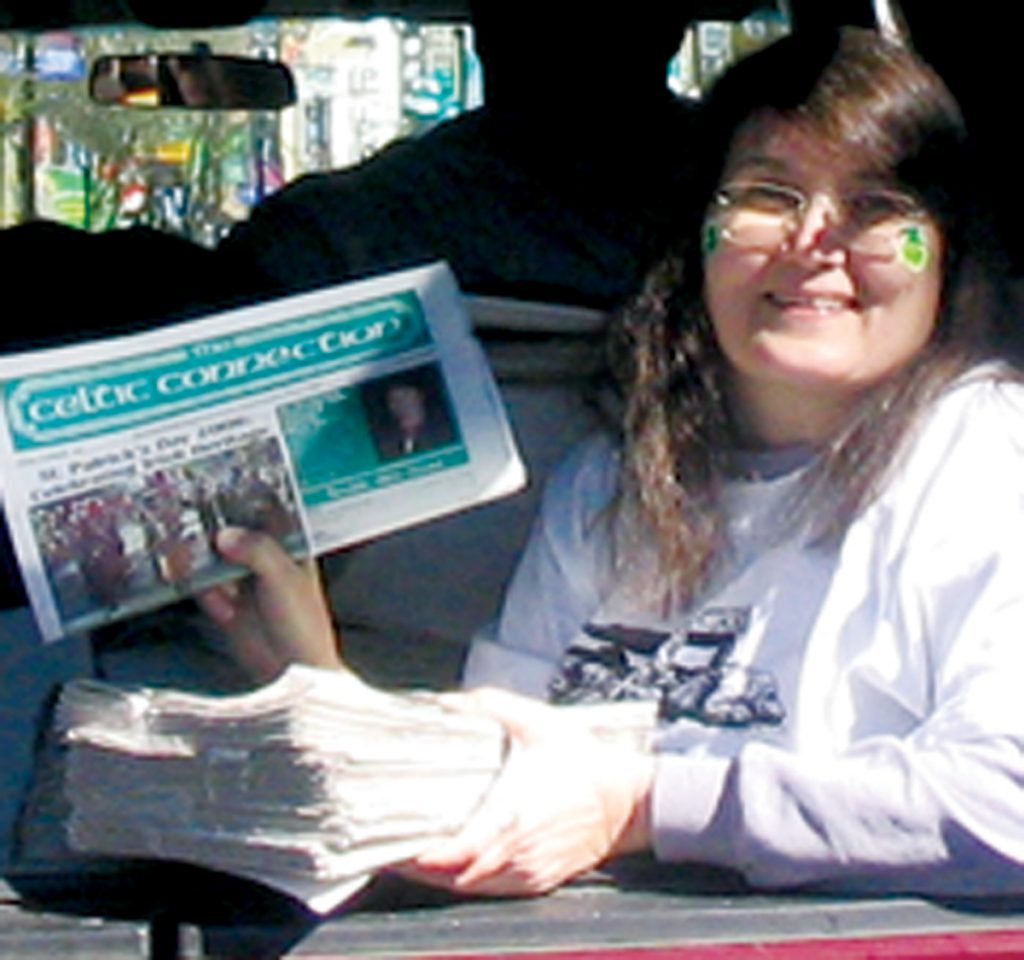 THE ST. PATRICK’S DAY parades were a lot of fun (and also a lot of work) and Colleen was always there helping to distribute copies of The Celtic Connection along the parade route.

Over the years, the paper won two major awards and we were all so proud.

I met a lot of great people working on the paper and there was such loyalty from all who were involved.

The people who wrote articles for the paper always kept us informed about local events and news happening around the world.

It was amazing how much I was able to learn about what was going on in the U.K. and Ireland. My friends who live there were always surprised how much I knew about their part of the world.

Maura and Catholine are more than bosses, they are a part of my life. We’ve shared joy, heartache, and all the funny things that went wrong.

José was always there to lend support and kept us going late into the night with tea and cookies.

The Celtic Connection wasn’t just pieces of paper folded together – it really was the heart and soul of the Celtic community.

People I would meet – both friends and strangers – would often tell me how much they enjoyed the paper.

Maura and Catholine, thank you for letting me be part of your ‘Excellent Adventure’.

Canmore Highland Games: ‘You have been an integral link to those within our circle’