HARRY-McGRATH is our correspondent from Edinburgh. As the former Coordinator of the Centre for Scottish Studies at Simon Fraser University in Vancouver, he brought a unique Scottish/Canadian perspective to his column.

EDINBURGH – It’s hard to put into words how much I will miss writing my column for The Celtic Connection or how much I appreciate the fact that Maura gave me the opportunity to do so.

I filed my first column soon after I returned from Canada to live, again, in Scotland.

Since then it has provided a regular opportunity to explore the connections between the two countries that have dominated my life and to assuage the familiar ache of being in one place while missing another.

The loss of my old Simon Fraser University email address, prevents me from checking what my maiden column was about, but I think it opened with the tale of a wee whisky I had in Blackfriars Pub in Glasgow with my friend Donald Paton, another who splits his life between Canada and Scotland.

From there it became a kind of stream of consciousness thing ending, as I recall, with a hike on Arthur’s Seat in Edinburgh.

Over the years, my columns became a bit more thematic. 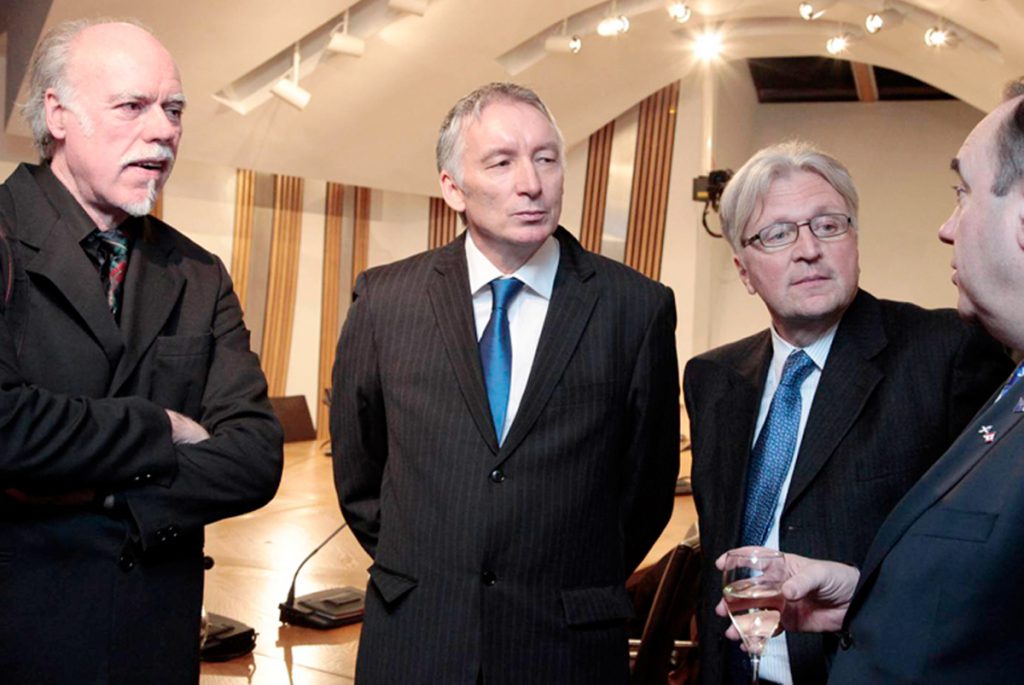 A rich source of multiple columns was a trip I took across Canada with my friend newspaper designer Graeme Murdoch to complete a project called ‘this is who we are’, part of the Scottish Government’s Homecoming 2009/ten years of devolution celebration.

We began our search for Scottish connections in Inverness, Nova Scotia and ended it as guests of the Lil’wat Nation in Mount Currie, British Columbia.

Many in the Lil’wat community share the iconic Scottish name Wallace which, our host Stan Wallace explained, was probably imposed on them by an Indian Agent who “either didn’t want to or couldn’t be bothered writing down our real names.”

And yet we, from the land of Wallace, were welcomed into the Lil’wat community in ways that I will never forget. And even if I did, I have a CC column to remind me of the experience.

Stan Wallace is, sadly, no longer with us. Neither is Canada’s first female foreign minister Flora MacDonald who invited us to interview her in her apartment overlooking the Rideau Canal in Ottawa and was the subject of a subsequent CC column.

Neither is Dennis MacLeod who helped save the project after the current President of the United States (I am not making this up) failed to deliver the match-funding we thought we had been promised during a surreal phone call with Trump Towers in Chicago.

Dennis’s legacy is too vast to detail here but his Highland Clearance statues – one in his home town of Helmsdale, the other in Winnipeg – both featured in a CC column about him.

There are other friends who have passed since I left Vancouver and I will always be grateful to the CC for giving me the opportunity to remember them in print.

One was Professor Ian Ross who worked with me to bring high profile visitors from Scotland to SFU’s Centre for Scottish Studies. Ian wrote the first full biography of Adam Smith in 100 years.

Another was Ron MacLeod, one of the founders of the Centre. Ron’s family emigrated from the Isle of Raasay to Tofino and I wrote in the CC about how I walked across Raasay in search of his family’s roots. The column formed the basis for Ron’s obituary which appeared in the Herald newspaper in Scotland when he died in 2015.

Occasionally, one of my CC columns would find a wider readership in Scotland.

In 2015 I noticed that Scotland’s National newspaper and the Toronto Star ran simultaneous headlines about Syrian refugees, one said ‘Welcome to Scotland’, the other ‘Welcome to Canada’.

The column was noticed by Na h-Eileanan an Iar (Western Isles) MP Angus MacNeil who read it on his cousin’s balcony in Burnaby and was kind enough to promote it on Twitter.

Last year’s column which argued that the Burns statue in Stanley Park, erected in 1928 and unveiled by Ramsay MacDonald, was as much about power and politics as it was about poetry, stimulated some debate on this side of the pond.

In short, I wrote 100 plus columns for The Celtic Connection, the vast majority not cited here. I am grateful for every one of them, for the CC supporters and volunteers who made them possible and for Maura’s Job-like patience when I contacted her (too often) to say that I might have to file a day or two late.

The news about the CC has left a wee hole in my heart as I am sure it has for countless others in a community that loved it. Thanks Maura, thanks Catholine.

Gura math a thèid leat! (if I had a Phoenix emoji I would insert it here).