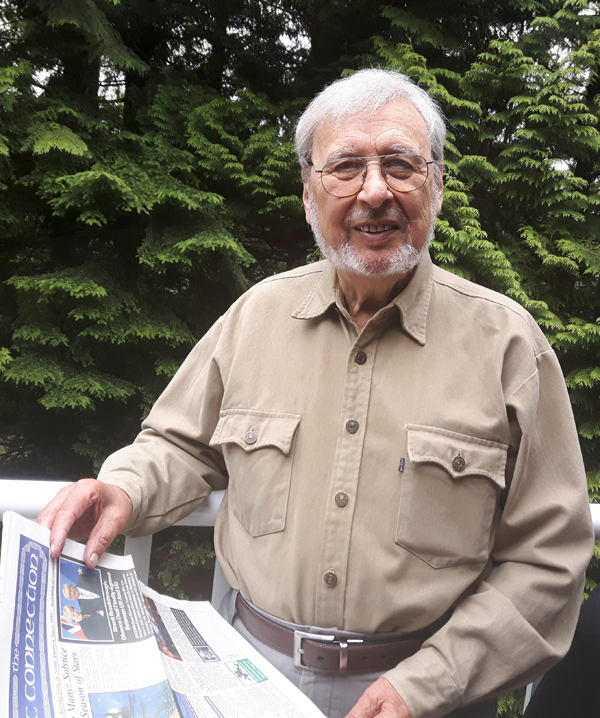 EIFION WILLIAMS is a long-time member of the Vancouver Welsh Society. His monthly column was a regular feature of The Celtic Connection for over 20 years. He was also a key member of our distribution team helping to deliver issues into the hands of our readers.

VANCOUVER – My association with The Celtic Connection began about 20 years ago after I moved to Vancouver from the B.C. interior and became active in the Vancouver Welsh Society.

One long-time Welsh Society member with whom I quickly struck up a friendship was the late Neville Thomas.

Neville had a wide circle of friends in British Columbia and was involved with several community groups.

He also had many connections with individuals and groups in the United States, the UK and Australia, which made him an excellent source for news or articles of interest to the public.

For many years, Neville and I would meet one afternoon a week in a Burnaby pub with a few other retired and active teachers.

Once a month Neville would bring with him several copies of The Celtic Connection and distribute a copy to each one of us.  The pub was one of the establishments to which he delivered copies of the paper every month.

Neville always spoke very highly of The Celtic Connection and its publishers, Maura and Catholine.

He personally delivered bundles of the paper to various establishments in Burnaby and the Tri-Cities as well as the Cambrian Hall and any venues where Welsh events were occasionally held.

As Neville’s health deteriorated, I took over his deliveries and continued to do so after he passed away in 2017.

But distributing the paper was not the only result of my association with Neville.

On one occasion he mentioned to me that he thought there was insufficient coverage of Welsh events in the paper and asked me if I would write a report on a particular event at the Cambrian Hall, which I did.

The event might have been the annual Gymanfa Ganu, a St. David’s Day dinner or the annual anniversary dinner.

Neville could be very persuasive. At his suggestion, my one report expanded into regular contributions to The Celtic Connection on Vancouver Welsh Society activities and gradually led to my contributing articles of wider interest to the Welsh community.

These included articles on the Welsh immigrant experience in British Columbia, the history of the Cambrian Hall, and events in Wales.

I also reported occasionally on the activities of the Dylan Thomas Circle, with which Neville was very much involved, and the two choirs that had close ties to the Welsh Society, the Vancouver Orpheus Men’s Choir and the Vancouver Welshmen’s Choir.

I also wrote articles on prominent members of the Welsh Society whom I respected and admired.

Among them were Captain Ieuan Lampshire-Jones, a Welsh-born merchant seaman who was presented with a prestigious award by the Association of Marine Surveyors of BC, and

Gareth Prytherch, a Second World War veteran who was a well-known linguist and teacher in Vancouver.

Other highly-respected members featured in the paper were John Pritchard, who once led the Wales and the World Ceremony at the National Eisteddfod of Wales, and Gwyn Evans and Jane Byrne, who were named Celtic Persons of the Year in 2017 and 2019, respectively.

Over the years, I was always encouraged to write reports on Welsh Society activities by the Society’s recent presidents, including Jane Byrne, John Morris and David Llewelyn Williams, as well as the current President, Lynn Owens-Whalen.

They all frequently expressed their gratitude and support for The Celtic Connection’s coverage of the Society’s activities.

Contributing to The Celtic Connection has been an interesting and worthwhile activity during the years of my retirement.

I am grateful to Maura and Catholine for giving me this opportunity and supporting and encouraging my efforts over the years.

Also, I remain grateful to the late Neville Thomas, who initially encouraged my efforts on behalf of the Vancouver Welsh Society and The Celtic Connection.

Above all, on behalf of the Welsh Society and the Welsh community in general, I wish to

express my gratitude to Maura, Catholine and Colleen for giving voice to the activities and achievements of the Celtic peoples of western Canada and the Pacific Northwest over the years.

Thank you for a job well done and best wishes for any endeavours you may undertake in the future.

To Maura and Catholine: ‘I remember those exciting early days’