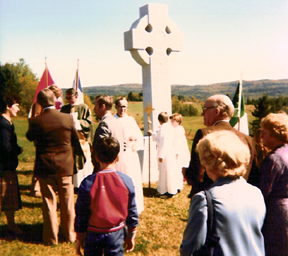 FR. O’MALLEY celebrated Mass in Irish at the dedication ceremony for the Celtic Cross at Martindale, Quebec in 1982.

Father Tom was born in Cleggan, Clifden, County Galway, a place he loved so well. It was in 1920 that his life’s journey led him through St. Jarlath’s College, Tuam, where among other things he was a high jumper.

He entered the novitiate in Kilshane in 1940 and was professed on October 4, 1941. He completed a B.A. (Hons) degree in 1944 and while prefecting in Willow Park, he did the higher diploma in education in 1945.

Tom’s mission appointment was to Mauritius in 1949, where he taught in College St. Esprit. While there he was loved by the students and gladly forgiven for his Galway-inspired pronunciation of the French language.

When he became ill, he returned to Ireland in 1960. Later that same year, when he was well enough, he was both teacher and bursar in Willow Park until 1975.

In 1975 to 1976, Father Tom went to Toronto and received a Master’s Degree in Divinity. Upon his return to Ireland, he was the Assistant Dean and Bursar at Blackrock College.

In 1981, he returned to Canada and was Associate Pastor in Guelph, Ontario and Provincial Bursar until 1984. Following his return to Ireland in 1984, he was appointed Bursar at St. Michael’s College, Dublin until 2000.

Tom’s interests stretched beyond the bounds of formal education. He represented Irish Scouting at many World Scout Conferences: Mexico City, Seattle, Nairobi, Copenhagen, and Montreal. In 1978, Tom was awarded the silver Wolfhound, the Chief Scout Supreme Award for outstanding service to scouting.

In 2001, Father O’Malley wrote a book entitled, Tales without Reason. He had visited Australia and wrote about the forgotten heroes of the apostolate in the 1840s in Australia. It was an adventure story about the depiction of life in the very early days of Western Australia.

I first met Father Tom O’Malley, in September 1982, when he came from Guelph, Ontario to say the Mass in Irish at the dedication of the Celtic Cross in the Martindale Pioneer Cemetery in Martindale, Quebec. Through the following years, we kept in touch up until the time of his death.

For extensive information and photos about the Martindale Pioneer Cemetery and Father O’Malley saying Mass and blessing the Celtic cross, visit: www.celtic-connection.com and click on Gatineau.