A Message from Jim Kelly the Irish Ambassador to Canada 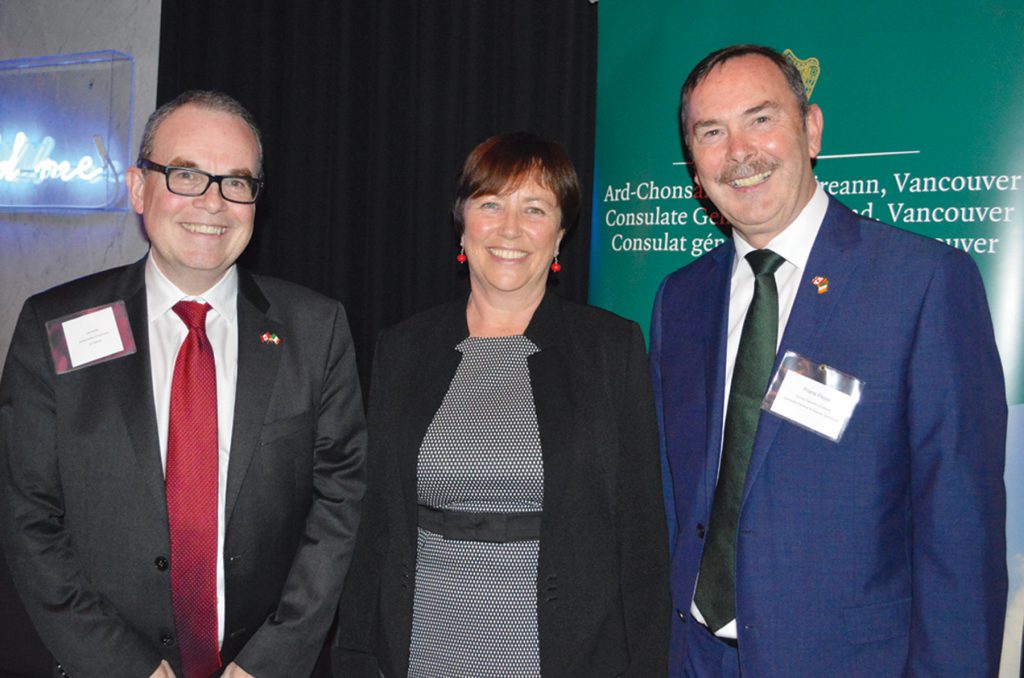 IRELAND’S AMBASSADOR to Canada Jim Kelly with Irish Consul General Frank Flood and his wife Orla in Vancouver following the opening of the new Irish Consulate General in November 2018.

OTTAWA – I write this message in grateful appreciation of the enormous contribution which Maura de Freitas, her mother Catholine Butler and all of the team at The Celtic Connection have made to the Irish community in western Canada, and the U.S. Pacific Northwest over almost three decades.

To produce for so long such a first rate and consistently top quality publication – always informative and interesting in equal measure – is an extraordinary achievement for which you and Catholine deserve great credit.

From the day I came to Canada as Ambassador and first encountered The Celtic Connection, I have always kept a lookout for the arrival of each new issue and would bring it home that same evening for an enjoyable and leisurely read!

Before that though, I had the good fortune to meet with Catholine and Maura much closer to home when they invited Anne and I and our girls to attend and speak at our first community function on arrival in Ottawa. 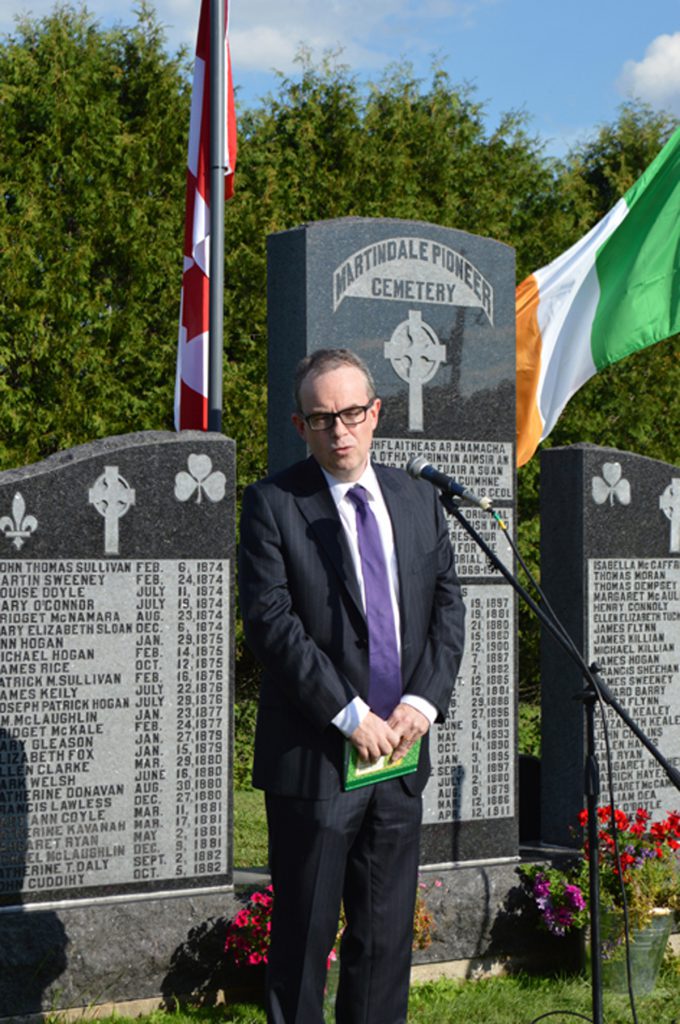 AMBASSADOR Jim Kelly at a dedication ceremony in Low, Quebec on September 18, 2016. This event was held at Martindale Pioneer Cemetery in St. Martin’s Parish now the final resting place for many survivors of Ireland’s Great Famine. This was the first event he attended upon arrival in Ottawa as the new Ambassador of Ireland to Canada.

This was the unveiling of a plaque to honour those (including Catholine) who had worked so hard to erect a poignant memorial at Martindale Pioneer Cemetery, the final resting place of many survivors of the Great Famine who had settled in the Ottawa Valley.

Our visit to Martindale on that sunny Sunday afternoon in September 2016 will remain a treasured family memory of our years in Canada, as we move on shortly to our new posting in New York.

I know that our Consul General in Vancouver, Frank Flood, and Vice Consul Jennifer Bourke are very appreciative too of the strong support that they have received from Catholine and Maura since the opening of the new Consulate in Vancouver.

Frank and his wife Orla have fond memories of their visit with Catholine and Maura just after their arrival in Vancouver, when they enjoyed tea and cake and heard first-hand of how The Celtic Connection was produced from such a family home full of warmth and love and books!

What really impressed them was not just how such a top quality paper was produced without any formal office space but also the stories of how it was distributed wherever there is an Irish community or venue in British Columbia.

On my visits to Vancouver, I always found Maura was a willing and generous source of valuable advice and insight.

For Frank too as our first Consul General in British Columbia, Maura was the proverbial font of wisdom and knowledge!

Whenever the Consulate needed to know who to contact, or the background to any issue, Maura always had the answers, could point the way or raise issues that needed to be addressed.

While always supportive, she was ever ready to ask the important questions and to discuss issues of concern.

An invaluable resource for the Irish community for so long, The Celtic Connection also played a key role in raising awareness of the opening of the new Consulate and its activities.

This was particularly the case when Minister Ciarán Cannon visited British Columbia for the St. Patrick’s Day celebrations in 2019.

The Celtic Connection advertised all the events and helped ensure their success including the first Irish Community Family Day event in St. James Hall.

It reported fully and captured the spirit of the occasion with lots of photos while also including a typically comprehensive write up of Maura’s interview with Minister Cannon.

Of course, The Celtic Connection was not just about the Irish as it has always lived up to its name with articles of interest to the Scottish and Welsh communities as well to the Irish in the Seattle area.

The Consulate has built on this engagement and with the support of The Celtic Connection has easily developed links with Scottish and Welsh groups in B.C.

Part of the newspaper’s legacy is that the new Consulate will work to maintain friendly and mutually supportive relations with our Celtic cousins in western Canada.

Through The Celtic Connection, Maura and Catholine provided an invaluable service to the Irish community in western Canada and the U.S. Pacific Northwest over three decades which I am sure will never be matched.

While we will all miss the paper, we wish you both well in your future ventures online and elsewhere.

In the words of the Irish poet and priest, John O’Donohue: “perhaps the art of harvesting the secret riches of our lives is best achieved when we place profound trust in the act of beginning.”

As you look to a new beginning, we know that you will both remain at the very heart of the community that you love in whatever new endeavours lie ahead for you.

Heartfelt thanks from all of us.

A letter from the Consul General of Ireland

A Letter from the Honorary Consul Ireland Southern Alberta & Saskatchewan